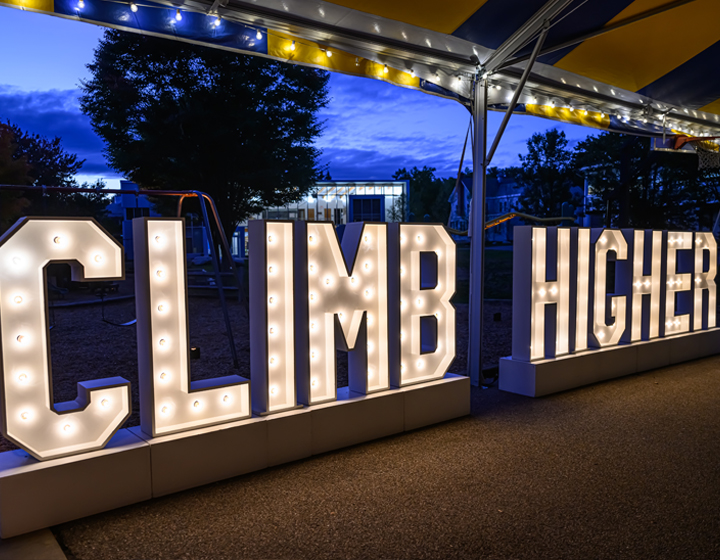 On Friday, October 14, more than 150 members of the Charles River School community arrived on campus to the sights and sounds of a milestone celebration. At the far end of our blue and gold tent, grand marquee lights spelled out “Climb Higher,” the name of the school’s newly launched $1.4 million campaign and the reason why CRS parents, faculty, alumni, and friends joined together for the gala. The evening included a live jazz ensemble, delicious hors d’oeuvres and drinks, and interactive displays to allow guests the opportunity to engage with the two tenets of the campaign: the transformation of the playground and building financial aid resources through increased endowment funds. On one board, guests added gold stars to the playground features that they would love to see added. Some even had a few ideas of their own to pin up. On the second board, guests read about the inspiring impact of financial aid and its benefit to the entire CRS community.

President of the Board Leslie Jackson Judge ’91 P’24 ’26 began the evening’s brief remarks with enormous thanks to the campaign committee and the campaign co-chairs, Molly and Ned Carney P’29 ’31 and Lindsey and James McElligott P’25 ’27 ’30. She also thanked Head of School Gretchen Larkin, whose leadership and vision over the past nine years helped usher in the two priorities of Climb Higher. Leslie handed the podium off to Molly and Lindsey, who each talked in more depth about the impact the campaign will have on every CRS student. They also shared the momentous news that, to date, the CRS community had already committed more than $1 million to the campaign. They explained with excitement and enthusiasm that not only reaching but exceeding our campaign goal is well within reach.

Gretchen closed out the evening’s program with, “It is hard to question a campaign that combines play, wonder, joy, and access to a Charles River School education. Access and affordability need to be at the forefront of how we think about the future of CRS. Growing our endowment ensures our commitment to socioeconomic diversity and the values rooted in our mission. No family whose child gains admission to CRS should have to decline based on affordability.”

She described the moment when she announced to the children that CRS was building a new playground. “The audible gasps, joyful cheers, and smiles filled Foster Hall. I told the Otters that I believed the playground was the heart of our school – yes, literally and metaphorically. They understood and agreed with that notion – so while creating renderings of their dream playground some also included heart-shaped play spaces and heart-shaped rock formations. Our playground – no doubt – embodies the spirit of CRS.”

To learn more about the Climb Higher Campaign, visit www.charlesriverschool.org/support-crs/climb-higher.